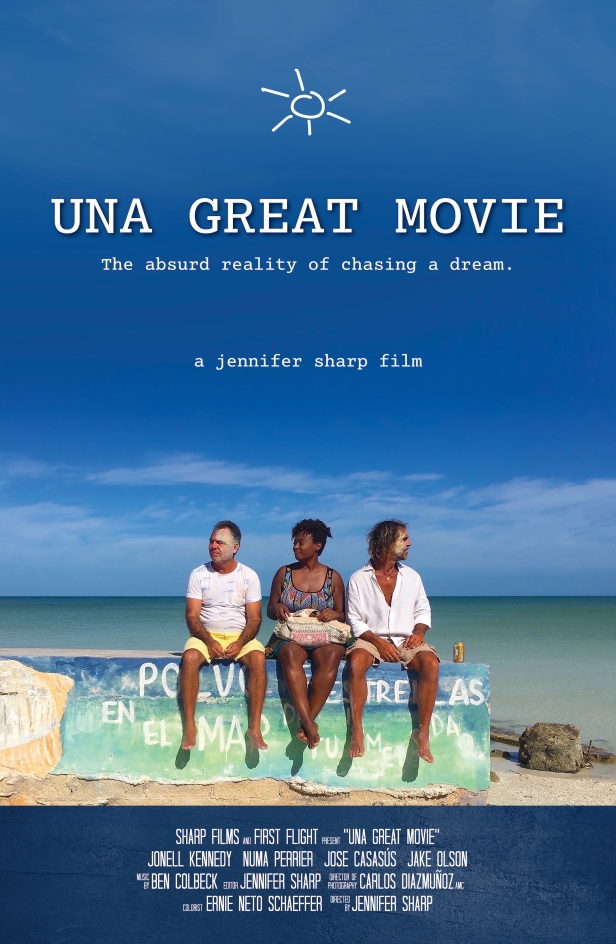 A black American woman drops everything and travels to Mexico in search of an experience that she let go years earlier. What she finds is not what she expected. Actors Numa Perrier, Jose Casaus, and JoNell Kennedy give a remarkable performance as the films’ main characters. Debuting on opening night at the CineOdyssey Film Festival in Charlotte, NC, Una Great Movie is a film within a film with complex ideas, meticulously executed. The films’ writer/ director, Jennifer Sharp makes it clear: this is not a minority themed movie about diversity. Rather, this movie is diverse because it encompasses people of varied ethnicities, cultures, languages, and experiences all having a “shared” experience when they come together. It could happen in Japan, Africa, or America. Finally! A movie with a “human” theme.

The audience is immediately challenged by the introduction of Susan, who appears to me like someone I might see at Costco on any given day. Actually, she could easily be me. Although I would never go anywhere with my hair looking like that. This is the main character, in a movie, for all the world to see. Wait, what? It was a little embarrassing. I clutched my pearls and looked around to see if anyone else noticed. And Luis is hopelessly in love with her. But he looks like that guy who helped me load all those plants into my Jeep at Home Depo yesterday. Nothing special. These are definitely not the type of people we’re used to seeing on the big screen. Women like Susan are NEVER love interests. So I found myself slightly annoyed to say the least.

Historically, movies have been a way to escape from real life. It’s supposed to be a fantasy. At some point, unfortunately, American culture became so wrapped up in make believe. Entertainment is now dictating how we live our lives. That includes how we look, how we think, how we act, thereby manipulating our experiences. Our tolerance for differences is almost non-existent. For sure it’s no accident this story takes place in a country that the US is currently debating a wall to prevent illegal access. Aimed specifically at Mexicans because Americans aren’t sneaking into Mexico for a chance at a better life. But maybe they should be. No one can argue intelligently that America still offers a better quality of life in most regards. What’s lacking are the things that truly make life worth living. The principles America was founded upon. Life, liberty, and the pursuit of happiness.

In the midst of my initial annoyance with the film, I started to see myself in terms of questions. What is it about these characters that is getting underneath my skin? Could it be Susan’s apparent wandering without desire? What’s wrong with the way she looks? We see her searching for Luis. But what does she want with him? We assume it’s for them to get married and live happily ever after. And when that’s not possible, I’m not convinced intimacy is worth such drastic measures to obtain. Who is she trying to fool?

Then there’s Zoe, the one who is responsible for the entire story of Susan and Luis. Realizing that she can make this into whatever she desires, I struggled to connect with her at first. The reason these characters are often flighty and erratic is that it’s all a reflection of Zoe’s life. She’s making it up as she goes while getting often racially prejudice critique from movie executives. Every rejection leads to changes that morph the story into something completely unrecognizable. Confused? That’s an understatement. Zoe doesn’t know how it’s going to end. Neither does the audience. The very real question at the root of this entire saga and for every creator of art: do you want to sell your work, or do you want to sell good work that is an authentic representation of you?

Suddenly I’m enthralled. Should I be rooting for Susan’s success at finding whatever she went to Mexico to obtain? Or should it be Zoe who wants nothing more than to have her script turned into a movie? What I am supposed to feel or think about Luis? Or the friend who appears out of nowhere to accompany Susan and winds up making a discovery of her own? The most phenomenal thing about this film is that Sharp doesn’t “direct” you to think or feel anything at all. Imagine that. The audience is like a fly on the wall (a literal reference in the film) seeing this play out. Realistic people in real situations that everyone has experienced at some point in their lives. You are challenged to not only draw your own conclusions, but also question your reasons for doing so.

If you’re looking for a predictable, perfectly casted, perfectly acted out storyline with a perfect ending, you will be disappointed. And that’s okay because life includes disappointments. Una Great Movie is a film that you see because you are ready for that “More/ Deeper” element that has been missing in the film industry. Walk away enlightened, stunned, inspired, and of course entertained. Presented in a way that encourages evolution, this story exposes what happens when the human race matters more than everything else we divide ourselves into. With surprising bouts of comic relief, Una Great Movie is definitely one of the best of its kind for all time.

Follow the director Jennifer Sharp for more information, where this film is showing, contributions and more great movies.

One thought on “The Human Spirit Knows No Borders”

Welcome to the official site of Ivoclar Vivadent OK/AR

This is our Passion. Vision. Innovation.......from Me to You.